Automatic Import of Closed Captions for Media - Not working as expected

We are producing _a lot_ of modules at the moment and each has closed captions with sound.

The documentation says that if we named our closed caption (.srt) files with the same name as the file and stored them in the media directory, Storyline 360 would automatically import them. (Source: https://community.articulate.com/articles/articulate-storyline-360-user-guide-how-to-add-closed-captions#import)

This doesn't appear to work for us.

The media files are .aac (standard for this) and the subtitles files are .srt.

I know we can add them manually per slide but at over 800 slides to do - we would love this automatic option to work.

What have we missed here?

Thank you for taking the time to share this. You took all the right steps in the import process, and I'm happy to explore further!

Do your closed caption line durations overlap with other lines? I ask because we're looking into this open bug in Storyline 360: 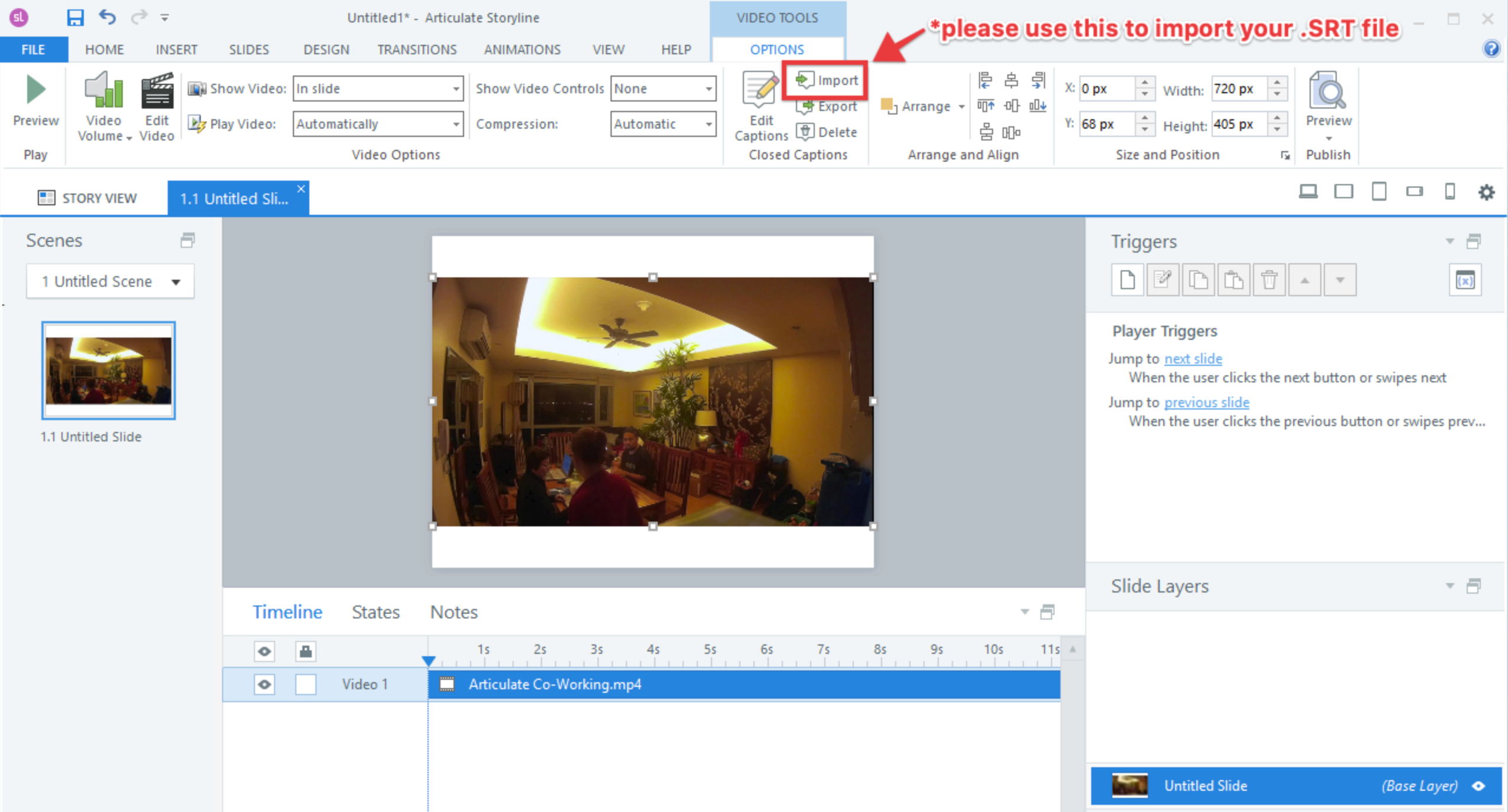 If that's not it, are you comfortable with sharing your files? We'll run a few tests and let you know what we find. Simply use this private upload link.

Hi there, I am having this same problem. Katie, what do you mean by if the cc line duration overlaps with other lines. ?

Great question! It looks like in the .srt file, the duration of one caption overlaps the duration of the following caption. In that case, captions are missing. We recommend manually importing the .srt by going into the Video Tools tab and use the Closed Captions: Import option.

If you'd like us to look at the affected file, you can upload it using this secure upload link.

Hello! I'm having a similar issue! Neither the automatic or the manual caption imports are working for me with the .srt files I was provided by my client.

Is there something I'm missing here?

I'd like to enlist our Support Engineers to offer their expertise to see exactly what you're running into! Would you mind sharing your .story file and .srt files? You can upload them privately here.

I'll make sure to follow along in your case to see what the fix is!

Hi - I'm having the same issue as all of the comments above. I initially had .SRT files named to match the accompanying video .MP4 files and no captioning automatically imported.

I then tried to manually import the Captions, as mentioned above - still didn't work.

The caption files were originally created with a text editor (Notepad), then imported to Davinci Resolve, where I edited both the video and caption content as required. I then exported .MP4 and .SRT content from DaVinci and tried to insert the files into Storyline - without success on the caption side of things.

Storyline does recognise that something is there, in terms of the Captions: although nothing is viewable on screen (either when editing, previewing or in published format) - if I try and import again, Storyline warns me that I will overwrite the existing captions (which are not visible!) - so it recognises that there is content present. It just won't display the caption content in any screen.

Hi - I have just noticed something, regarding Caption behaviour:

I imported a video file and manually imported the captions into Storyline (which didn't display).

I then went to 'Edit Captions' and within that window, chose to delete the captions (which were not visible) and I got a system warning message to check I wanted to remove the captions.

Having deleted them, I saved and closed the Caption editing window.

However, I then selected 'Add Captions' from the ribbon, to reopen the Caption editing window - and from within that, selected to 'Import Captions' again - at which point I again got a warning message that I would be overwriting the existing captions (which I had deleted) - BUT, the original caption boxes appeared for the first time on the editing ribbon (but without any text appearing), with the correct time settings for each:

This is the first time there has been any visible evidence that Storyline is aware of something loaded in a caption format - albeit that the caption boxes are still not populated with any text.

It looks like my teammate, Maria, responded to you over in this discussion here. I encourage you to share your file with our support team as that will give us better insight into what you're experiencing and provide tailored support!

So does the Import Captions Simultaneously with Media option work? Our captions do not import automatically into Storyline 360 when I import our media. We would also like to be able to get this to work because we have many slides with audio that all require captions.

I see that you reached out to our Support Team directly in a support case and worked with my teammate, May! Great call. May has logged this as a possible software bug where Storyline is not importing the closed captions automatically with its media that has the same name and folder container.

We'll continue updating you in your support case!