I am building a slide with 2 layers

base layer:  has a "cc" button and a replay button

trigger 2 shows the cc layer if the cc variable = true

The cc layer toggles on & off perfectly and the replay slide button functions correctly.

Problem:  When the cc layer is displaying and I hit the replay button, it automatically hides the cc layer and I have to click the cc button again to show the cc layer.

I had to change the slide properties to "Reset to initial state when revisiting" to make the replay slide button function correctly. I don't think that this would affect the cc layer because it is supposed to be triggered by the cc variable.  Also, I ordered the triggers: change cc value, and then the show/hide layer.

What am I missing?

What you're trying to do sounds solid.

In an effort to streamline your development, I would encourage you to consider if you could do away with the extra buttons on the CC layer, they should be unnecessary.

When your CC layer shows, the CC button and replay button on your base layer should still be clickable.

Do you have a sample .story file you could share that exhibits this behavior?

I appreciate your input, Brian. I would love to do away with the extra buttons on the cc layer. I have attached the .story file as you requested.

I added a trigger at to show the cc layer when the timeline starts if the cc variable = true. That fixed it!

You were very close to having the functionality you wanted, all I did was rearrange some of the triggers.

Instead of attaching the triggers to the button click I moved them to the slide level. When the ccvariable changes do this. I had to also add an additional trigger to show the CC layer when the slide's timeline starts, which caused the CC layer to display if "True" when your replay button was clicked.

I've attached the updated file, and here's a screenshot of the triggers panel - 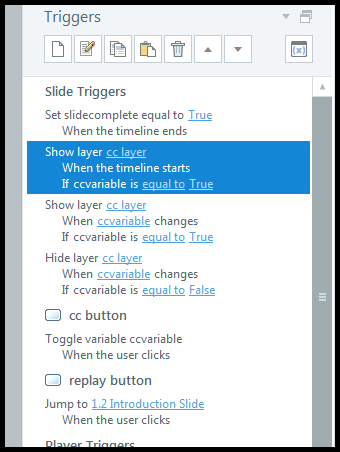 Wow! I really appreciate your helping me. I didn't know how to create a trigger that would show/hide a layer when it was not attached to a button click. That is VERY useful information that I will be able to use throughout building my projects. I'm an ISD and we just switched from Captivate 8 to Storyline 2...new learning curve!

Thanks so much, Brian!

Ah, all kinds of fun switching from CP to Storyline. The more you use Storyline the more you'll get a feel for the differences between the two.

There's usually more than one way to do something in Storyline, and they sometimes have advantages/disadvantages...  An example is the trigger for the CC variables.  Attaching these triggers to button clicks is perfectly fine, and as you've seen works quite well.  You were able to get your course working before I had a chance to respond... I've increasingly begun to detach these from button click events which makes it easier to associate these triggers with various other types of interactions as well.

Look forward to seeing more of what you're doing in Storyline!