My storyline360 file suddenly became corrupt today and I have no recent back up.

I've uninstalled and re-installed storyline 360 and restarted the computer meaning I have no temp files to try and restore.

Thanks for popping in here with that, Kelly! So glad you're back up and running 🎉

3) Change the file extension of the copy on your desktop from *.tmp to *.story.

4) Double-click the file to open it in Storyline.

Just wanted to share that this just worked for me following a PC crash that corrupted my file.

This just saved me!  Thank you!

❤️  So happy to hear that Alissa!

A good reminder to follow along with the steps here to keep your files in tip top shape!

"A common cause is working off a network/shared drive".

Do we know WHY this is a common cause, or if there will be a fix for this in the future? We work in an entirely remote office and have to share files between multiple people all the time, and we all need access to our files. Having to copy them to a local drive and then copy them back to the shared drive adds time to the process, and means someone inevitably forgets to upload the most recent version of something so someone else ends up working on older files. We need to be able to work from shared drives.

So I'd like to understand WHY working off a shared drive causes file corruption.

And I'd like to know if this is something that will be addressed with future versions of the software.

That's a great question, and we appreciate your curiosity! From my understanding, there are a number of reasons why working from a network drive can cause file corruption, namely...

Also, if a file is opened by several people on the network, or if the network connection crashes, file corruption can occur.  It's for these reasons that we, along with Flash and Captivate, have discouraged working from a network drive for quite a long time.

Running into a corrupt file is no fun for anyone, but fortunately following these tips will prevent that from happening.

Hey Alyssa, thank you so much for answering this! It is so helpful to have a clear WHY behind the WHAT, ya know? This helps a lot.

Hey Ashley, I'm happy that was helpful for you! And I'm really glad you asked the question, because I'm sure there are others who are wondering the same thing. Thanks for being a part of this great community! 😊

Proof once again of the great value of this community! I used the file extension name change and it just saved me. Thank you!

So happy to hear that helped! We've also updated Storyline 360, build 3.29.19305.0 with a new project recovery feature. Check out the details below:

Storyline 360 helps you recover a project that corrupted after an unexpected event, such as a computer crash. The next time you try to open the project, Storyline lets you know if there are any temporary versions that you can restore. 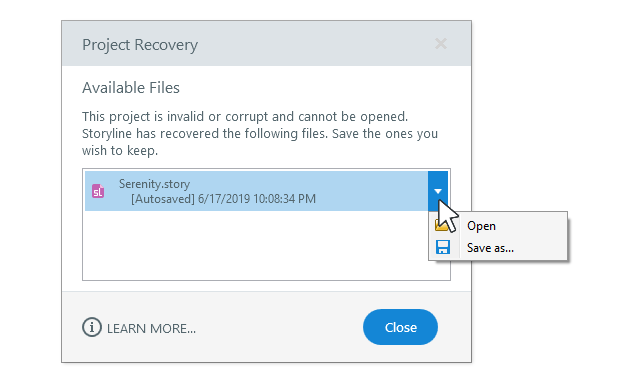 When you see the Project Recovery window, click the drop-down arrow for the file you want to restore, then select either Open or Save as.

If there are multiple versions of your project and you're not sure which one to open, you'll probably want to choose the one with the most recent timestamp since it's likely to have the latest changes.

Let us know if you have questions. We’re happy to help!

yes I think too, I face the same problem today and the latest update of storyline was yesterday. I believe that updates make files corrupted sometimes

If not, I suggest submitting a case so we can offer more tailored support.

Thank you Ashley!!!! worked like a charm and saved my life as well. Almost had a heart attack

Saving lives and files, all in a day's work! 😉

Keep in mind you'll want to follow the steps  for working on local project files as detailed here to prevent future odd behavior in your files, which can ultimately lead to corruption!

I agree, this has happened to be twice within 1 week. I practiced saving multiple files of the same Storyline every time I made changes and now all 4 are still corrupt. All they can say is they don't know how this happens and it's getting to the point where it's now counterproductive to even use program. I am so disappointed in all the time and effort i've put into each project only to have nothing to prove for it.

You know, this is an ongoing issue with this software-years long duration. Ooops doesn't cut it anymore. It frequently happens after one of your updates.

A major request-elephant in the room, actually-is that you fix this once and for all. There should be a back door way to deconstruct these files. Digging through our Windows app data is not sufficient either.

We pay far too much money to have years of our work destroyed because of this software.

If I try to import files from a corrupt project, I get this message: Could not open project

The file"..." is being by another process or you do not have the proper security permission to access this file.

All of the slides are clearly there.

3 days and now up to 4 completely different projects all corrupted..

I have read 75% of the forums about files becoming corrupted that date back to Storyline 1 along with making 3 cases and I notice a trend of responses which is to copy and paste to the victim of the corruption, "Sorry there is nothing we can do. Follow these best practices below". I have read endless amounts of people who have lost all their work/livelihood and for years the same response of I'm sorry follow the best practices and good luck.

I followed all the best practices and still had this issue happen now 4 times in 3 days. The first person who helped me was a champaign and went above and beyond and recovered half of my project but the root cause of the issue has not been identified meaning there is a very good chance all future projects will be corrupted too.

I don't get why there are years of endless forums of people complaining about their files corrupting though without being satisfied with this copy-paste response of follow the best practices and good luck. If you lose months worth of work and have a hard deadline on a project that you will be sued for not delivering as you likely signed contracts with that client that would hold up in court just tell your clients to keep their money because you don't need it and then tell your clients sorry I have no project to give you so get over it. If your client doesn't understand tell them sometimes they might get a project and sometimes they might randomly not so tough turkey for them. Am-I-right??

Has anyone had these corruption issues with Adobe Captivate? I use Adobe products all the time and have never once had a corrupted file so not sure what everyone's experience has been? Can someone respond if they have ever had an Adobe Captivate project just randomly corrupt?

Within 8 hours of my last post on this forum, I have had a lot more issues with Articulate Storyline....

For the 4 files that corrupted on my other computer, I followed everything perfectly in every forum and in the case that they suggested doing to ensure best practices were followed so nothing would be corrupted.

Any help would be greatly appreciated.

Thanks for sharing what you are experiencing in your software.

I've added your latest comment to the case you are currently working on with Hazel and she's connected your previous cases from your other e-mail account as well.

You should be hearing from someone soon.

Has there been any progress made on this issue of files suddenly becoming corrupt? The number of files we've seen become corrupt has jumped considerably in the last few months.

We build courses for clients and sometimes have to send the source Storyline files to them for editing on their end. The last three times we had clients request their Storyline files, the files were corrupt or unable to publish when the client tried opening them. When we open them, they're fine.

To make it worse, we've now come to the point where sending files between coworkers on our own team, the files end up corrupt when someone else on the team tries to publish. It's as if the only person who can publish the files is the original author of the project.

We really need this resolved, as it's causing issues for our customers editing the files, and our own team editing files among ourselves. A HUGE negative impact on business. And pretty terrible considering this has been an ongoing issue for Articulate for years.

I'll  be sending a support ticket, but also wanted to get this out in the public in case anyone else on this forum has also seen an increase in this issue recently.

Articulate really needs to get this under control.

Thank you for creating a support case and for sharing the details of what you are experiencing. I can see you are working with my teammate Chester, so you are in great hands!

When sending files to co-workers or clients, please remind them to open the file locally, as working from a network drive can cause erratic behavior.

If you have additional questions, reach out to Chester through your case so everything is documented in one place.

I hope this helps!