Hide seekbar on base layer

I have a number of slides that have a video that plays in a separate layer. I want to have the seekbar available for the video layer, but don't need to have it on the base layer. Is it possible to hide the seekbar on the base layer, but have it visible on a different layer? I know I could make the other layer a separate slide and then just hide it on the first slide,... just wondered if this could be done in one slide.

When using layers, they are connected to the base slide so for the purposes of buttons like the next/previous, seekbar, other player elements, etc. they'll need to be on the base layer and all the slide layers. If you'd like to just have video controls, you could add to the video the "Show video controls" although this will unlink it from the slide timeline.  You can select this within the Movie Options toolbar: 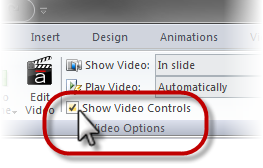 Thanks Ashley. That is so obvious and I shouldn't have missed it!

Let us know if you need anything else!