Transform any 360° image into an interactive learning experience and help learners retain information with knowledge checks.

Adding Triggers to Markers and Hotspots

In the 360° image editor, you can make markers and hotspots even more interactive by adding triggers to them. Just select the marker or hotspot and click Trigger on the ribbon to open the trigger wizard. You’ll only see a subset of actions—such as Show layer, Lightbox slide, and Adjust variable—that are specific to 360° interactions. And triggers always fire "when the user clicks."

And you can add multiple triggers to the same marker or hotspot. For example, one trigger might show a layer when learners click a marker while the other trigger might adjust a variable at the same time. Just select the marker and click the Create a new trigger icon in the Triggers panel. (Clicking Trigger on the ribbon again will disable the trigger.) 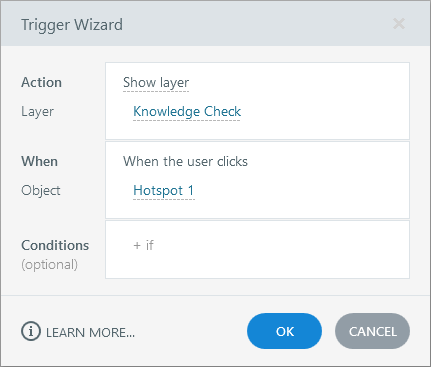 When you add a button to a marker or hotspot label, a trigger with an easy-to-edit lightbox action is created by default. In the Triggers panel of the 360° image editor, click the segments of each trigger description, then choose an option from the drop-down list. Like with triggers, you’ll only see a subset of actions that always fire "when the user clicks."

Or, edit a trigger by double-clicking it in the Triggers panel or selecting it and clicking Edit at the top of the panel. After making your selections, click OK to save your changes and close the trigger wizard.

It’s easy to create interactive knowledge checks to your 360° image. Here’s how.

When you add a 360° image, Storyline 360 creates two project number variables so you can track learners’ progress:

The hash symbol (#) becomes a number depending on how many 360° images are in your course. You can also rename the variables and/or change their default value. (You can’t change their type.) 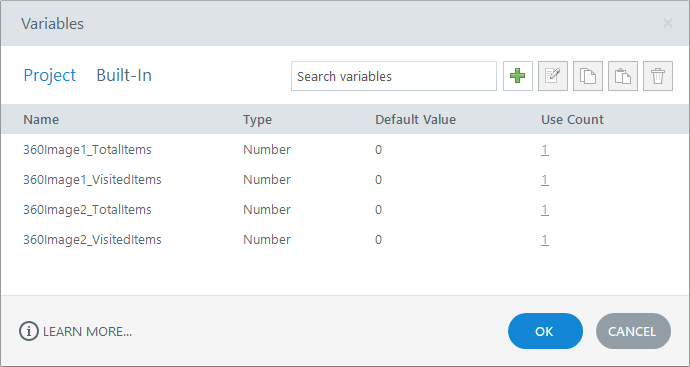 Tip: Make your interactions even more individualized. Use these number variables to display custom progress meters, interrupt the interaction with a lightbox after a certain number of markers have been visited, or perform other actions at specific points in a guided tour.

Katie Riggio
Technical Writer
This site uses cookies. By continuing to browse the site you consent to the use of cookies. Learn more here